AGEINCO requests support from the Minister of Economy, Business and Industry to achieve a greater international presence of Galician engineering 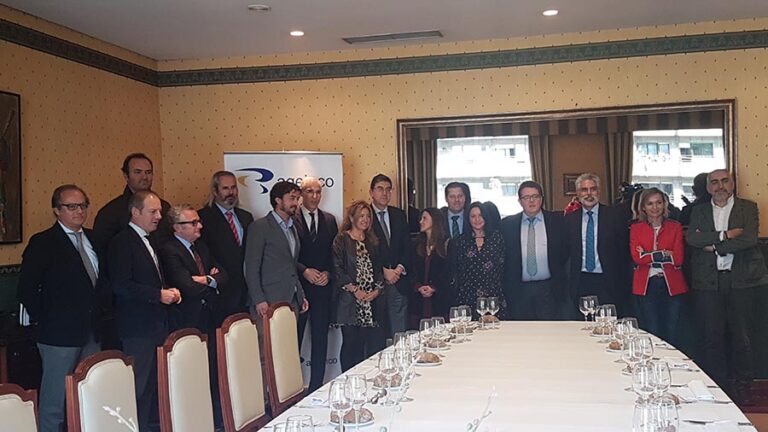 The Regional Minister for Economy, Economy and Industry, Francisco Conde López, was the protagonist of the fourth AGEINCO 2018 Tribune, in which a dozen companies from that association participated, among which his entire board of directors was represented.

Conde thanked AGEINCO for its invitation to participate in this event and to know first hand the needs and suggestions of this sector, at the same time thanking the willingness that this Association always shows when collaborating with the programs of the Xunta.

Conde transferred to the attendees the commitment of the Galician Government with the industrial growth of Galicia offering measures that simplify the procedures and facilitate investments in the Community. In this sense, some of the lines of work that will be developed in 2019 – year in which 50M € in business financing and 40M € in digitalisation and introduction of Industry 4.0 – will be advanced, as well as the priority business initiatives that will speed up the administrative procedures.

The president of AGEINCO, Fernando López Mera, explained that it was of vital importance to give to know the fabric that Galician engineering represents, the value it brings to the market
current and its important activity inside and outside Galicia. So much so that among the requests that were made from AGEINCO to Francisco Conde is the organization of international missions with an exclusive engineering component.

In this regard, the need for aid to be more short-term was also stressed. “It is a sector in which immediacy is very important, we find it very difficult to work with terms of half a year or even more,” explained López Mera.

Following with the international scope. AGEINCO again requested your help to have a professional, formed by the association, who is in the South American market and who is in charge of identifying different business niches for engineering. “We need a person who knows the sector, what it is dedicated to, what kind of needs we have, with which we can have a constant contact, in short a professional that can be trained from the engineering sector and that is dedicated to it exclusively, “added its president.

In this regard, the vice president of the association, Daniel Prieto, said that “we are facing a sector with a very large potential, because we can not forget that these companies are the spearhead when it comes to detecting business niches, they also have a tractor effect because the engineering also drags to another type of companies like those of services or constructors, among others “, assured.

For the vice president “the possibilities of technological enablers of the companies of
AGEINCO not only fulfill that tractor role inside and outside the Galician economy, but also
they also create, retain and repatriate talent as a lever for innovation and internationalization of SMEs. ” In fact, the participating companies invited the Conselleiro de Economía to visit them to know their work in situ.

The AGEINCO Tribune was also attended by the director of IGAPE, Juan Cividanes, and the territorial delegate of the Xunta in Vigo, Ignacio López-Chaves.

Prior to this Tribune, a meeting of AGEINCO members was held at the Círculo de Empresarios de Vigo, chaired by Fernando López Mera, accompanied by Vice President Daniel Prieto Renda. In this forum it was agreed to design a roadmap in which the steps for the entity to be established as AGEINCO Cluster will be defined. The objective is that everything be prepared for next February, when the association plans to renew its address in internal elections.

The president said that “we face this transformation as a natural process, as a step forward from being an association that only engineers integrate to include other actors in the sector, such as universities, technology centers and certain areas of the Administration “.

The Regional Minister for Economy, Economy and Industry valued the initiative and committed to “Accompany it to the extent that it is useful and there is consensus on the part of the companies, which are the ones that must decide which is the best way”. Francisco Conde defended in any case the “associationism and collaboration” as the way in which the Xunta supports the productive fabric of Galicia.